Iatrosophion was compiled and used by Greek healers and practitioners of folk medicine, perhaps including local clerics, from the 16th to 18th centuries, possibly in Crete. The volume is foliated in part, but largely paginated (pp. 1-815). There are many missing and unnumbered pages. Decorative head pieces in the earlier parts of the manuscript. The text is comprised of approximately 70 sections, written in at least five different hands. This volume contains extracts from Greek medical treatises and information on botanical remedies (with a few color illustrations of plants), pharmacology, popular cures, astrological medicine (with charts), lists of “good” and “bad” days for phlebotomy, magical script, Cabalistic symbols, Zodiacal signs, pseudo-Solomonic pentacles, invocations of angels and demons, amuletic texts, spells, and prognostications. Among texts extracted are “Logoi pneumatikoi metaphrasthentes eis tēn koinēn glōttan para Agapiou monachou” (fols. 1r-3v); the “Iatrosophion plousiōtaton Agapiou Lantou Krētos logiōtatou kai sophōtatou” (fol. 21r-64v), copied from the Geoponicon of Agapios Landos (1585-1657), a Cretan monk; and “Vasileia Solomomtos,” a Greek version of the Clavicula Salomonis (fols. 171r-201r). [from summary notes at Princeton University Library]

Ioannis Marathakis & Stephen Skinner do not include Iatrosophion in their renowned study on the Hygromanteia manuscripts but it shares similarities with those they did. It has many of the same characters, magical recipes, drawing, and figures found in Atheniensis 1265 including the Ring of the Art, the first and second Circle of Evocation, planetary characters and seals, etc. However, it does not include the pentacles characteristic of the Key of Solomon we know today. 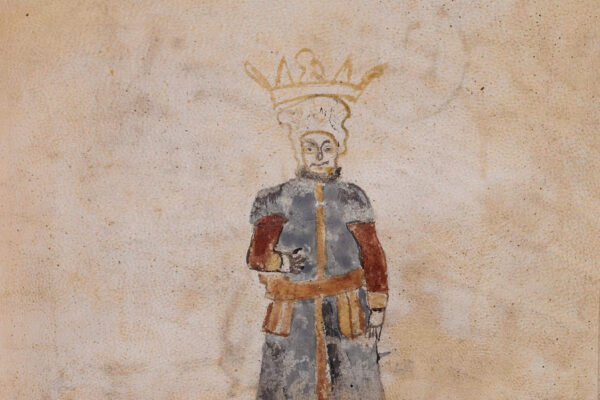