by Antonio Venitiana, 1782 – Only known copy

Le Petit Grimoire is a condensed version of Le Grand Grimoire. It is extremely rare, and to my knowledge, no other copies are known to exist. There is only one mention of the book in a French bibliography from 1896 titled, Les Almanachs Français: Bibliographie-iconographie , which dates it 1782. The date seems quite reasonable based on the typography and the paper. The typography is inclusive of the long s (ſ) which is an archaic form of the lower case letter s. The long s disappeared from new typefaces rapidly in the mid-1790s and was replaced by the the short, terminal, or round s. Although not infallible, its a a common marker used to identify books printed before 1800. The book is also printed in handmade paper indictable of the 18th century. Based off of these qualities, I am inclined to accept the 1782 date which places Le Petit Grimoire‘s printing very close to the earliest known editions of Le Grand Grimoire (ca. 1750, 1775)

Le Petit Grimoire is a good example of a Bibliothèque bleue work. These editions, much like the English chapbook and the German Volksbuch, were cheap, widely distributed paperbacks that made literature accessible to all levels of society. They were prevalent across France from the seventeenth to the nineteenth century and came to be known as livres bleus, or “blue books” for their blue paper covers. This copy of Le Petit Grimoire however has “brown-colored, cardboard wrappers” which is more common for softcover grimoires of this time, especially the earliest copies of Le Grand Grimoire (ca. 1750 or 1775). In my opinion the name, “blue books” is misleading as these books came in many colors (i.e. red, pink, green, blue, black, brown). These editions are also known as Colportage as they commonly sold in urban bookshops and carted off into the countryside by itinerant colporteurs (peddlers).

One interesting quality of the text is its use of the Ring of Invisibility woodcut from Le Petit Albert to illustrate the magic circle. This leads me believe that the title is not only meant to describe the abbreviated nature but describe it as as hybrid of Le Petit Albert and Le Grand Grimoire. This would have been a great marketing ploy as these two texts were the most popular grimoires of the time. 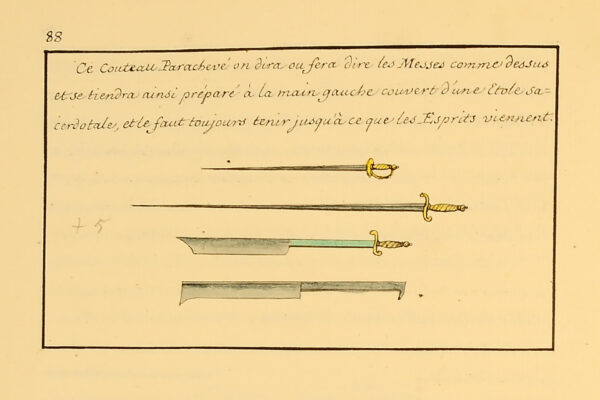